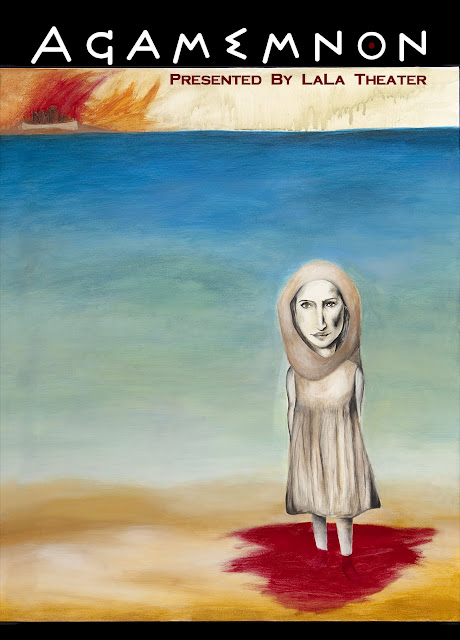 ..
The war is won, but danger waits at home.
10 years at war overseas.
Troy is burning.
Sacrifices were made for victory,
now the King sails home.
..


One actor and one violinist stage an entire Greek Tragedy.
..
..

Elizabeth Baron and Mikylah McTeer orchestrate a piercing rendition of the epic Agamemnon, whose themes of war, revenge, victory, justice, and the endless cycle of violence prove chillingly relevant to our world today. In a gripping harmony of action, text, and original violin composition, the duo traverses the arc of Agamemnon’s return to his neglected country and queen, and the consequences that await the triumphant.

Baron adapted and  culled from myriad translations, resulting in a singularly accessible, poetic and illuminating text.  On stage, Baron single-handedly breathes life into the tragedy’s characters with the accompaniment of Dr. McTeer’s violin. Chorus, queen, and oracle beckon us into a world where our shadows take graceful and gruesome shape. Our fears and unconscious instincts awakened, we consider the wide breadth of roles we each are capable of playing in our society and our ongoing human drama. 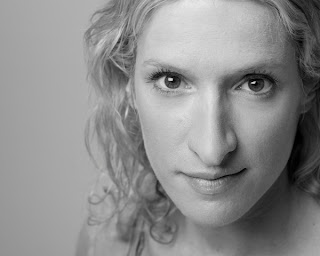 ELIZABETH BARON (Director/Performer/Adaptor) has performed internationally for more than 20 years. Her approach blends "psychological" acting with Lecoq-based Movement Theater.  She is a member of Actors Equity who acted professionally in NYC, performing in Off-Broadway and regional theater productions, before moving to Colorado to earn her MFA in Actor-Created Physical Theater from Naropa University/London International School of the Performing Arts (LISPA.)

For the past 7 years, she has been based in Boulder, Colorado, creating collaborative theater as an actor, musician, writer, director, and teacher. Elizabeth's most recent CO projects include her award-winning, highly acclaimed production of Aeschylus' Agamemnon, (LaLa Theater, June 2009, Dairy Center) and acting in Buskerfly Productions’ films: The Mayor and The Mongrel and Buskers Bounty, Levante International Film Festival’s Selection, 2009.

Most recent directing: Bobby Dart's Requiem for a Snowflake (LaLa Theater, Boulder 2009), Nomadic Theater Company’s The Last Show You’ll Ever See (productions in Oregon, Colorado and California,) and Gemma Wilcox Productions' 52 PickUp. (Best of Fest, BIFF 2008) which continues to tour the US and Canada, to great success. Elizabeth is currently working with Gemma Wilcox on a collaborative theater project, Dangerously Safe?, premiering at the Boulder Fringe (BIFF) August, 2010, at CU Boulder’s ATLAS Theater.

Elizabeth was awarded the 2010 BCAA/Neodata Fellowship for Theater.

--> She leads mask, red nose, and movement workshops and classes locally and throughout the US, for independent artists, theater companies and Universities. Elizabeth is currently studying and teaching as part of the intensive pedagogic training at Giovanni Fusetti's international school of theater creation – Helikos: Scuola Internazionale Di Creazione Teatrale, in Florence, Italy. After having completed the three-month workshop “The Pedagogic Journey” with Giovanni Fusetti in Boulder in the Fall 2009, Elizabeth will be continuing the training in Florence between Fall 2010 and Spring 2011, as pedagogic assistant of the First Year program. This will involve theoretical classes, discussions with the faculty, supervised teaching sessions and the development of her own voice-work curriculum, in collaboration with Giovanni Fusetti. 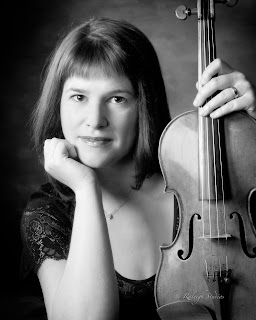 DR. MIKYLAH MYERS MCTEER (Composer) is Assistant Professor of Violin at West Virginia University, where she maintains an active chamber music and solo performance schedule.  The Pittsburgh Tribune-Review has called her performances "energetic and virtuosic."  She was formerly the violinist of the Red Shoe Piano Trio at Fort Lewis College and the violinist of the Moores Piano Trio in Houston, Texas, which was the silver prize winner at the 2000 Carmel Chamber Music Competition.

Dr. McTeer has performed internationally as a soloist, chamber musician, and orchestral player in Japan, Korea, Taiwan, Italy, Germany, Austria, Slovakia, and Hungary. She is a returning member of the Colorado Music Festival. 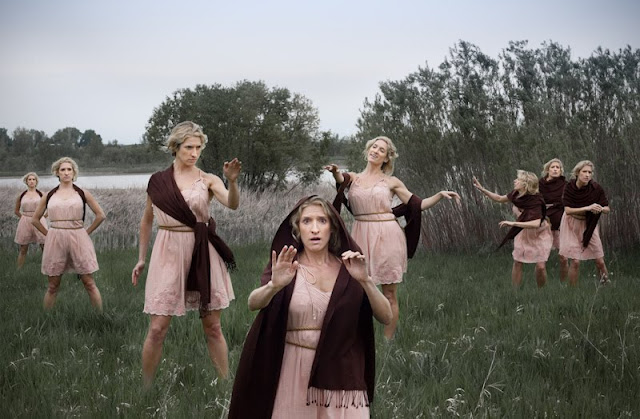 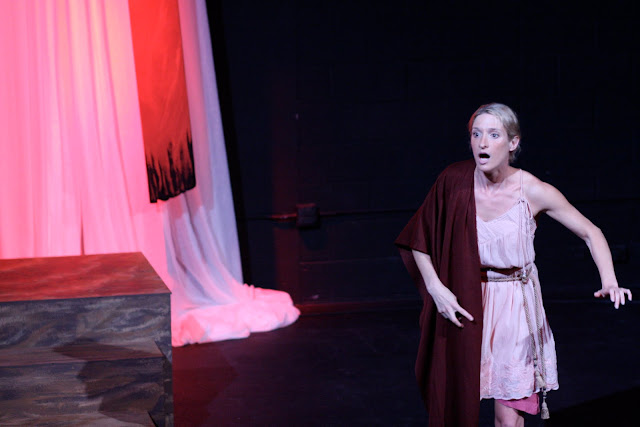 "...Elizabeth Baron plays all the characters in LaLa Theater's new version of "Agamemnon," Aeschylus' story of a Greek king poisoned by his own fateful decision.

Baron doesn't inhabit the eight characters so much as she invites them in and they inhabit her. 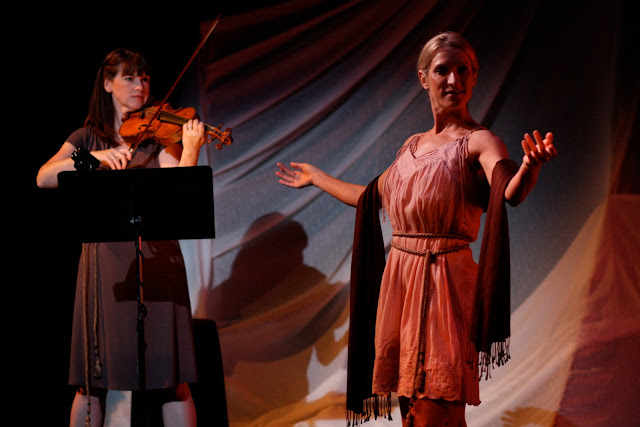 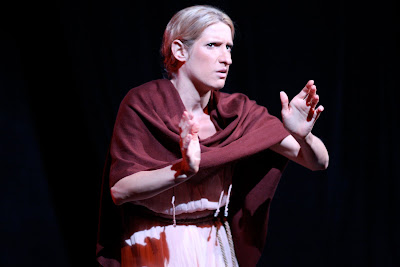 Her performance during the nearly two-and-half-hour play is a remarkable display of an actor in full command of her vocal and physical instrument, and with complete access to a rich emotional palate. 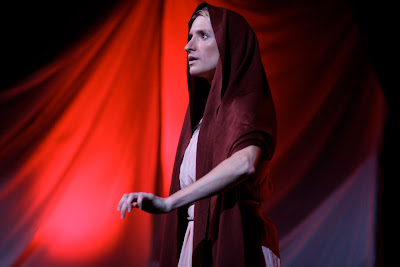 Using only a scarf and her own skill, she moves between elegant, flowing, grizzled, clownish and earthy personas with striking precision and nuance. Even though the script sometimes asks much from the audience -- it's Greek tragedy, after all -- Baron's performance is captivating... 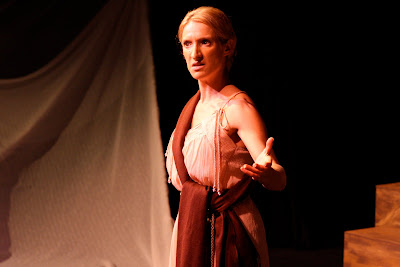 Aeschylus wrote "Agamemnon" circa 458 B.C. His dramas were innovative in that they were the first to use more than a single actor on stage. 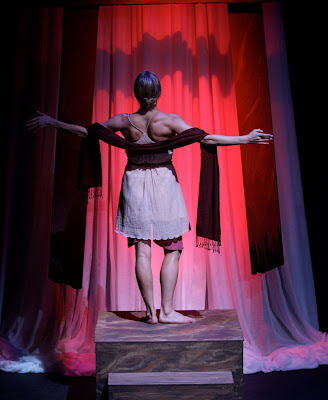 Interestingly, the fact that Baron is the single actor in LaLa's version brings intimacy to the performance and helps make it accessible...

Baron adds a contemporary edge to several moments. In her version, The Watchman is a wry onlooker, helpless to the whims of those in power, but not without biting commentary... 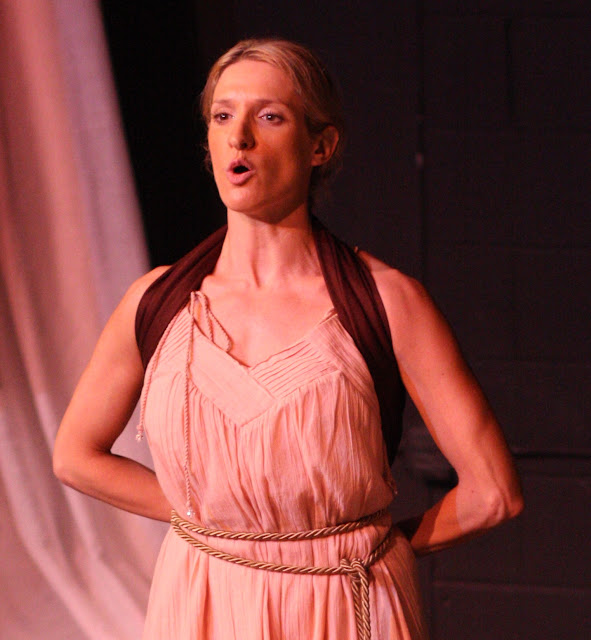 ...Hughes' vivid and direct language, and Baron's clear, pointed delivery makes the description of Iphigenia's death and the devastation Agamemnon's troops brought on Troy jump from the stage..." 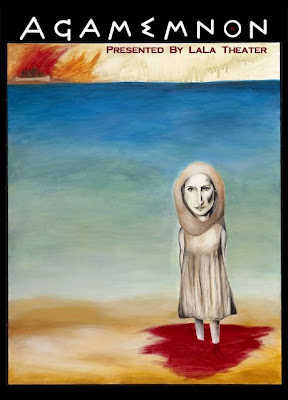